Why does stigma still surround ME?

Because doctors believe it's all about deconditioning

Almost nobody, except a tabloid headline-writer, says ME is “all in the mind” these days. So why is there still such a stigma attached to ME/Chronic Fatigue Syndrome?

In my experience, the stigma gets  worse the more severely affected with ME you are. Now that my illness presents in a moderate form, the treatment I get from the medical profession is mostly benign neglect. When I was very severely affected it was a different story: I experienced outright hostility, open disbelief, accusations of hysteria, attention seeking, malingering and manipulation. I was very, very ill and yet my poor parents were shunned by doctors and left to care for me alone.

While doctors rarely say ME is all in the mind, many of them believe something close to that.The most influential group of researchers into ME/CFS in the UK have established a  received wisdom on this complex and poorly understood illness. They work on the premise that:


“cognitive responses (fear of engaging in activity) and behavioural responses (avoidance of activity) are linked and interact with physiological processes to perpetuate fatigue.”
PACE Trial 2011

The Deconditioning Theory of ME/CFS

According to this widely accepted hypothesis, the physical symptoms of pain and fatigue in ME are a normal physiological response to a deconditioned state. Patients get deconditioned because they avoid activity, wrongly believing it will make them more unwell. 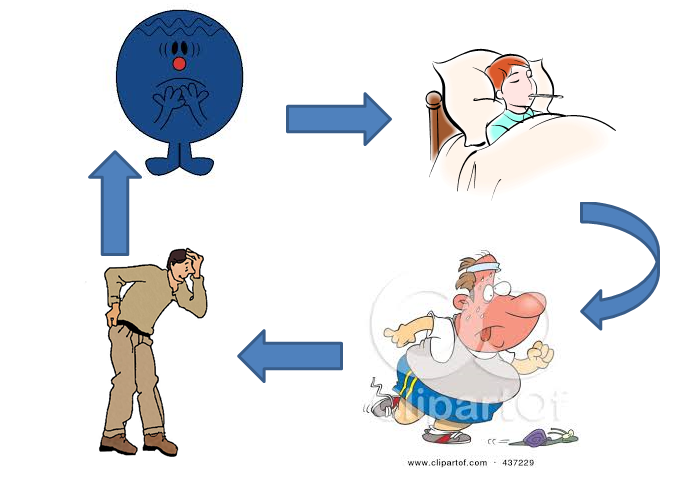 It also goes under the name of the Biopsychosocial Model, which is a bit misleading because there’s very little of the “Bio” or the “Social” in it. What it translates as, to GPs and other medics too busy to look into less well publicised research and science, is that ME/CFS is aches and pains and tiredness within the normal range but filtered by an over-anxious mind. Now you begin to see where the stigma comes from.

The deconditioning theory may be plausible for someone who presents to their GP with mild ME, e.g. difficulty exercising. The treatment offered – Cognitive Behaviour Therapy  to change your perceptions of your illness and help you gradually increase your activity levels -  also seems plausible, although recent trials show it does not result in an objective increase in function.

But how on earth do you explain the symptoms of someone who presents with severe ME, who can’t sit up or feed themselves, by the deconditioning hypothesis?

Did I really become anxious, inactive and deconditioned in my mid-twenties to the extent that I could no longer lift a spoon to my mouth, or wipe my own bum? If I did, my apprehension of reality must have been very seriously distorted. Yet instead of the compassion and care you might hope for if you were suffering from severe delusional state, my family and I got cruelty and abuse. The “treatment” offered to us was to leave me on a ward, without help to feed myself, until I got so hungry I would snap out of my little game and eat by myself.

Doctors can’t explain severe ME by the deconditioning theory. Sadly, some resort to vilifying or shunning what they can’t explain. I’m lucky I was over 18 at that time, or I may have faced the “child protection” bureaucracy that has seen many children and young people with ME separated from their parents and institutionalised under damaging “treatment” regimes.

Recent biomedical research squarely refutes the theory that the physical symptoms of pain and fatigue in ME are caused by deconditioning of the muscles. Muscle biopsies from people with ME show significant abnormalities in function compared to healthy but sedentary controls.

To end the stigma of ME and the shocking neglect and even abuse towards severe ME we have to knock the deconditioning theory on the head once and for all. We need to change the received wisdom on ME within the medical profession. It won't be easy but it looks like at last we science on our side.

Do No Harm lobby

June 19, 2019
This is the text of a speech I gave at a lobby of parliament organised by John McDonnell MP on 13.02.19 called Do No Harm . Campaigners told MPs how to reduce the appalling damage to disabled people's lives caused by social security cuts and reforms. Catherine Hale   A hostile environment for disabled people The Windrush scandal revealed how government policies can deliberately make life difficult for its citizens. The same hostile environment has been put in place for disabled people, through welfare reforms that have caused us such suffering and harm, and made us into objects of hostility and distrust. The hostility and suspicion was not accidental. As Mo Stewart, who can’t be here today, has demonstrated, its origins can be found in the writings of two scientists, Gordon Waddell and Mansell Aylward, who’ve advised insurance companies and governments on ways of cutting payouts to sick and disabled people.   Their body of work says that most chronic mental and
Post a Comment
Read more