In my introduction to this series I talked about how chronic illness feels relegated to the outer fringes of the established disability rights movement. We (who sometimes call ourselves "spoonies") tend to locate our disadvantage and exclusion more in our malfunctioning bodies, than in society's failure to accommodate us. As a result we sometimes overlook and fail to address the discrimination and the hostile attitudes that disable us still further. And we get dismissed as unemancipated, or worse, as traitors to the cause, by veterans of the DR movement who may fail to understand the lived experience of an impairment very different to their own.

So this is an attempt to redraw the map of disability, or rather of impairment, so that the experience of chronic illness is less peripheral. The idea is this: all forms of disability/impairment* can be located along two axes: Well to Ill, and Visible to Invisible. I realise how challenging it is to attempt to place conditions like Autistic Spectrum Disorder alongside say, HIV as many would argue they are not commensurable. So, like all ideal types, this one is far from perfect but I hope it will have some value in helping us to think differently. Ultimately, the aim is to better distinguish what kind of adjustments people need in order to be included; and understand what kind of discrimination they may face.

A Map of Disability 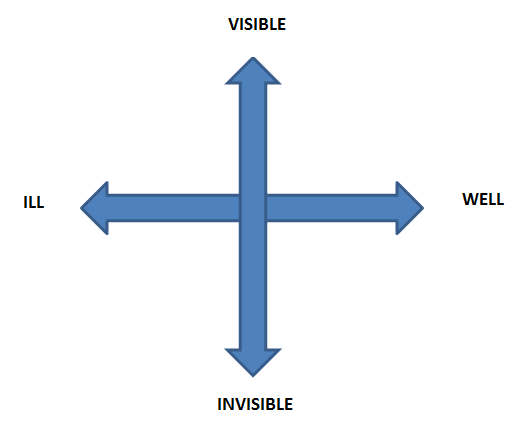 The Disability Rights narrative has largely been mapped from the vantage point of the Well and Visible ends of the spectrum. The forms of prejudice and discrimination encountered from this position are relatively well documented. But social oppression and disablism is equally, though differently, experienced from the opposite vantage point: the Ill and Invisible ends of the spectrum.

Some commentators have polarised Sickness and Disability but this is a false dichotomy because long term illness IS sometimes a form of disability according to the Disability Discrimination Acts and many people with "classic" disabilities like spinal injury can have associated health problems. Instead I suggest Ill and Well in recognition that disabled people can, and often do, enjoy good health.

"Well" is more difficult to define than "ill" in the context of disability. My attempt to define Well is to say that the impairment, or point of difference is localised to one or more isolated limbs or organs, leaving the rest of mental or physical functioning intact. The purest example would be an amputee, or someone with hearing loss with no other associated health problems. Most people won't be at the extreme end of the spectrum but somewhere between the two poles. A fully Well disabled person doesn’t experience any drop in overall energy or stamina levels. So someone with mild depression for example could be located towards the Well end of the spectrum, but more severe depression may be accompanied by significant fatigue so they would be further towards the Ill end.

‘Ill’ is where bodily distress (pain, breathlessness, fatigue, nausea) arising from a long term medical condition results in a significant loss of global function, often both physical and mental. This loss of function is usually not fixed but cumulative in response to exertion. The more Ill someone is, the more their total load day to day activity is reduced, rather than one or more specific activities or functions.

Some conditions like Rheumatoid Arthritis, multiple sclerosis or Ehler's Danlos Syndrome typically feature both types of disability: local and global.
The Ill to Well spectrum is useful for thinking of barriers to participation and what kind of adjustments are required to achieve equal access. I would venture to suggest that the more localised the impairment, the easier it is to accommodate by technology or specific interventions like an interpreter or braille.

This is rough way of dividing conditions that are self-evident, and ones that aren’t. It can allow one to predict what type of discrimination will be experienced. People with self-evident difference face a very different form of prejudice than those whose difference is intangible. Wheelchair users describe experiencing pity, paternalism and the assumption that they are weaker than frailer than they really are. People with communication difficulties resulting from cerebral palsy are often assumed to be intellectually impaired when they aren’t. Social awkwardness and fear are common forms of disablism experienced by people with visible difference.

Impairment which is hidden or not immediately manifest is socially mediated in a completely different way. Scope's End the Awkward campaign shows the awkwardness in some social contexts when one person doesn't know the other has hearing loss. Often the degree of visibility or invisibility depends on the social context.
Many forms of chronic illness are disabling according to the DDA but produce no obvious signs. To the extent that Sick people are able to participate in any form of activity at all, their strategy is usually to “pass as normal” and avoid situations which are disabling, eg public places without seating, locations where parking is difficult. Often socialising with strangers is avoided, where the subject of occupation and social role, and therefore the need to disclose Sick identity, is likely to arise.

Invisible impairment can be said to give the subject more control over how they are perceived and by who, than a visible impairment. But this is a double edged sword. Passing as normal is a form of "stigma management" that can be largely unconscious and can over time become disabling in itself. Disability is reluctantly revealed because the act of disclosure is risky: making oneself vulnerable to moral judgement about whether claim is genuine or made to disguise "shirking". Many people with invisible chronic illness avoid social encounters or commitments altogether because they find this act of disclosure too emotionally distressing. The result, of course, is the erosion of social networks and isolation.

Conclusion – Sickness and the Social Model

The purpose of mapping disability in this way is to ensure that policies designed for including disabled people in society target the full spectrum of disability, not just the Well/Visible poles. The subjects of the map are not diagnostic labels but unique individuals whose position will be determined by the severity and combination of their conditions.


Sickness is a material condition in and of itself that can severely limit social participation, interaction and work. However, there always social barriers involved too. In particular, hostile attitudes around genuine disability vs malingering or fraud become internalised to produce a very distinctive form of “awkwardness” that, I suspect, can be as disabling as the condition itself.
Sick people could be better included in society if these barriers were addressed. But in order to adapt the social model of disability to chronic illness we face an extra step. Before demanding our  right to reasonable adjustments we need to establish our identity as a genuine Disabled person and not shirker. This requires that we bring “medical” issues about how our conditions affect our individual capabilities into public discourse.
Vic Finkelstein’s insistence that the personal experience of impaired bodies be suppressed from public discourse about disability can only hold when the impairment in question is already a social fact, ie self-evident. When applied to invisible disability it leaves us in a political no-man’s land.
We have to, however reluctantly or uncomfortably, bring impairment into a public arena in order to have our needs recognised and solutions for access and inclusion defined. It is understandable that some sections of the disability rights movement are hostile to Sick people explaining how their condition impacts on their capabilities because locating disability in individual defective bodies subverts the main message of the Social Model.
But until all experiences of discrimination and hostility towards disabled people can be brought together under one map sick people will always remain, at best, on the outer periphery of the Disability Rights movement.

With thanks to Jenny Morris and Liz Crow for comments on an earlier draft, and to Simon Duffy for proposing this series.


* I struggle over terminology here: "impairment" is the correct term according to the social model of disability for whom disability is located in society's hostile structures and attitudes. But "impairment" is problematic for people who learn or perceive the world differently because it implies a deficit. So I'm afraid I use both.

Do No Harm lobby

June 19, 2019
This is the text of a speech I gave at a lobby of parliament organised by John McDonnell MP on 13.02.19 called Do No Harm . Campaigners told MPs how to reduce the appalling damage to disabled people's lives caused by social security cuts and reforms. Catherine Hale   A hostile environment for disabled people The Windrush scandal revealed how government policies can deliberately make life difficult for its citizens. The same hostile environment has been put in place for disabled people, through welfare reforms that have caused us such suffering and harm, and made us into objects of hostility and distrust. The hostility and suspicion was not accidental. As Mo Stewart, who can’t be here today, has demonstrated, its origins can be found in the writings of two scientists, Gordon Waddell and Mansell Aylward, who’ve advised insurance companies and governments on ways of cutting payouts to sick and disabled people.   Their body of work says that most chronic mental and
Post a Comment
Read more