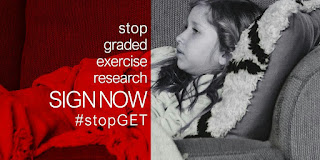 
Imagine you get a mysterious and highly debilitating illness. It takes away much of what you love in your life. Your doctor says there may be a treatment that can help. It’s not a drug but a behavioural reprogramming therapy developed by psychiatrists. It’s safe, she says. And proven to be effective in a study published in The Lancet.

Sounds odd, but you go ahead with the therapy with an open mind. It consists of getting you to gradually increase your activity levels and exercise. Not only does it not improve symptoms but the behavioural regime prescribed actually makes your illness worse. Your therapist is unsympathetic and says you are showing a negative attitude and that your entrenched belief system is what is keeping you ill. When you become so ill you can’t physically get to the clinic any more, your therapist berates you for not complying with the treatment, and strikes you off their clinic register.


This is what happened to me at age 19. The treatment was Graded Exercise Therapy (GET) for Mylagic Encephalomyelitis (M.E.), also known as chronic fatigue syndrome (CFS).


Had I been a few years younger, the outcome could have been a lot worse than being left severely disabled without any medical care. My therapist could have alerted my Local Authority, who could have investigated my parents for neglect of my medical care because they stopped bringing me to clinic appointments. At worst, I could have been locked in a psychiatric institution for enforced “treatment”, as happened to Sophia Mirza, who died following her ordeal.


GET has been prescribed for children and adults with M.E./CFS in NHS clinics for years, but now a research trial is seeking to prove its effectiveness in children.


· GET is currently being trailed on 100 children with M.E./CFS in a study called MAGENTA, with a view to a much larger trial in the near future.


· There is overwhelming anecdotal evidence of harm and increased disability resulting from GET in adults and children.


· The consent forms for the MAGENTA trial do not disclose the significant risk of harm from GET.


· The evidence base for the efficacy of GET in adults with M.E./CFS has now been demolished. The Lancet has faced calls from 40 scientists worldwide to retract the controversial PACE study which wrongly claims 60% of patients improve with GET.


· 121 Families who withdrew from, or refused, GET for their children have faced investigation for child abuse or neglect. To date, none of them have been found at fault.


· M.E./CFS is the most common cause of school absence in children.


GET may help some individuals with a diagnosis of chronic fatigue syndrome. But in a survey by the ME Association, 74% of respondents reported that GET made their M.E. worse, leaving some people dramatically and permanently more disabled as a result. Current research shows abnormalities in ME patients’ energy production systems including a dramatic slowdown in cellular metabolism. This probably explains why ME patients cannot generate the resources to exercise as MAGENTA and other graded exercise studies recommend. GET is based on a psychosomatic, or "cognitive behavioural" model of M.E. which is no longer sustainable.


At the moment there are no biomarkers to distinguish which group of patients may benefit from the treatment, and which group may be harmed by GET.


None of the information concerning possible risks appears in MAGENTA’s participant information sheets, raising serious concerns about whether the children in the trial, and their parents or carers have given genuine informed consent.


Please help us stop MAGENTA, and all trials of graded exercise therapy in ME.