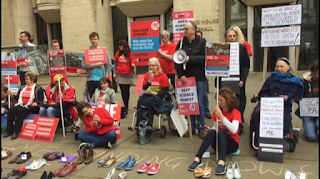 My address to crowd outside Department of Health, Whitehall


Our small gathering here today is just the tip of the iceberg.

We are standing in for the Millions Missing worldwide: the millions of people affected by the multi-systemic disease ME aka chronic fatigue syndrome who are too ill to be here today.

There are 250K people in the UK with ME and many can’t be here because they've been trapped in bed for years by this most crippling of illnesses, and they’ve been abandoned by our healthcare system and forgotten by the world.

The shoes you see here belong to some of those who can’t be here in person but who want you to hear their voice and witness the injustice they face. And they want the Dept of Health to listen and to act on this injustice.

The neglect of people with ME by governments and their health authorities is a global scandal. And there are protests like this one happening across the world today.

But here in the UK we’ve endured something perhaps even more cruel than neglect of our disease; we’ve had a deliberate cover up.

I want to tell you about it because you won’t read it in the press, and your doctor probably doesn’t even know about it.

Here in the UK we’ve endured a whitewash of our disease that has propelled the careers of a powerful group of clinicians and researchers, while we patients have seen no benefit, and many of us have even been harmed by their programme.

I became bedridden as a result of their so-called treatment.

The scandal of ME in the UK goes by the name of PACE.

PACE was a research trial of treatments for ME aimed at modifying patients’ thoughts and behaviour. It was based on the notion that ME is not an organic disease but a psychosomatic disorder, a view rejected by The US Institute of Medicine and the WHO.

Among the international scientific community PACE has become a byword for dishonest and unethical research practices, for the vested interests of an elite taking priority over patients’ health.

PACE researchers manipulated their methodology so you could be more disabled at the end of the trial than you were at the beginning and yet be classed as recovered.

PACE researchers illegally withheld their data from fellow scientists to avoid scrutiny of their methods.

PACE researchers ignored the overwhelming evidence showing that their graded exercise therapy made many people’s illness even worse than it already was.

PACE research showed no improvement in ME on any objective measures from their treatment of cognitive behaviour therapy and graded exercise, in trial that costs £6 million of taxpayers’ money.

And why aren’t these researchers being held to account? Follow the networks of power and influence in UK medicine and you will see that PACE researchers and their great patron occupy the highest of ranks in the medical establishment. Their reputations appear to be untouchable. We the patients are allowed no say in.

Meanwhile PACE and its discredited hypothesis continues to drive NHS policy on ME, and in turns impacts how people with ME are treated by welfare and social care systems. Patients are still routinely told to get out and exercise. People’s health continues to be put in danger.

Right now children are being subjected to trials of graded exercise therapy by colleagues of the PACE team at the University of Bristol.

We demand an end to trials of graded exercise therapy on children.

We demand that NICE reviews its guidelines on ME to remove the harmful influence of psychiatrists associated with PACE.

And we demand that Dept of Health take the lead in promoting the new research agenda emerging from outside the UK which gives us hope and consign the PACE agenda to history.

The millions missing here today are crying out for our government to invest in research into the causes and treatments for ME. We need science that is honest and ethical and puts patients first.